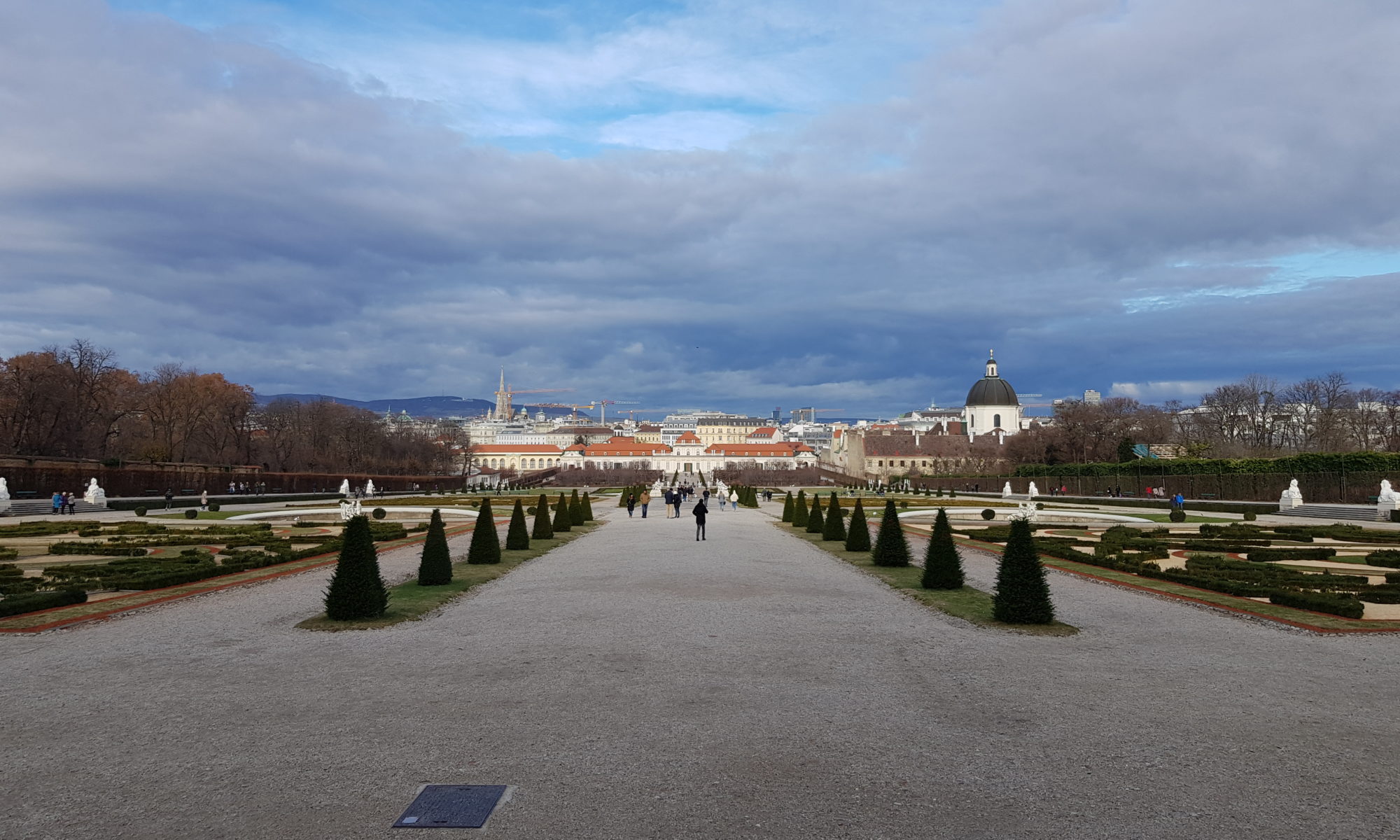 A couple of weeks ago, I had the great pleasure of being in Vienna for a few days. It had been ages since my last visit there, and I couldn’t help feeling overwhelmed by the choices of what to see. Where should I start? Should I just stick with one topic? Or district? The amount of art, architecture, music, literature, culture is just so overwhelming.  My expectations and hopes were understandably high. Straight upon stepping out from the metro at St Stephen’s Cathedral, I felt so many different periods around me. The Cathedral, of Romanesque and gothic structure, is topped by a fabulous colourful roof. Its images with a mosaic of the Habsburgs’ double-headed eagle and the city’s coat of arms on the Northern side is a motive for any tourist to see. Even though St Stephen’s Cathedral has been rebuilt or extended, it feels like a perfect unity. The square surrounding it, with the lovely small huts forming a Christmas Market and the buildings leading to the Graben or the Opera make it very much part of a whole too. Fin de Siecle, Renaissance, Baroque and modern all being one. The Haas house, for instance, just opposite, was the first shopping mall in Vienna. Built in 1866 / 1867, it was destroyed at the end of the second world war and was later replaced by a new building by Hans Hollein which opened in 1990. The building was initially very controversially accepted by the Viennese. Now, of course, with time it has become just as much part of the attractions on this square as the rest. The Viennese are proud citizens of their city. This is the city where one sits in coffee houses and reads the newspaper for hours. The Viennese “Kaffeehaus” is actually a fabulous cultural institution. Having a melange (a Viennese cappuccino) with a Maronitorte or a Sachertorte and philosophising with a friend, gossiping, reading a book, writing a novel or having a business meeting, that all is happening in Vienna’s coffee houses. The “Kaffeehaus” is probably where most of life happens in Vienna. It has nothing to do with the coffee to go, throw away modern life which wishes to be so green but doesn’t really have time for it, and thus fails to see that actually sitting down and just allowing time to go by whilst discussing, reading, or just taking a moment for oneself is probably the healthiest meditation in today’s hectic city life.

The history of the “Kaffeehaus” is closely connected to the end of the Viennese Siege in 1683. Legends have it that Georg Franz Kolschitzky (1640 – 1694)  got then the first licence to serve coffee using beans left by the Turks. Some say that coffee was also called Turkish soup. The first coffee house though was opened by an Armenian Spy called Diodato. This reminds me of the later huge impact of the Austro-Hungarian empire and of its creative influences and exchanges with the East. These are still very much present in the Vienna of today.

Spirits and personalities all around Walking down to the Hofburg, the Opera, the Burgtheater, the Albertina, the Kunsthistorisches Museum, up the Bastei, the Jewish Square, the Musikverein, the Museumsquartier, the Belvedere, the Naschmarkt, the Theater an der Wien, the Secession or Spittelberg, one experiences history all around. The Renaissance, the enlightenment years, the Habsburgs, the fin de siècle and it’s Jugendstil and the modern times too, all these can be seen and felt in Vienna. I can almost sense the spirits of Beethoven, Schubert, or Schiele, Klimt, Freud and many others walking around me. Being a musician, I am very much aware of the number of composers who lived here throughout the centuries. Mozart of course, but also Haydn, Schubert and Beethoven are the big classics. I just love that walking through the city one can read on plates who lived in that or this house. Walking to Theater an der Wien, I not only read that Beethoven‘s Fidelio was first performed there but that he also lived in the building for a while. I had never realized that one could live there too. Beethoven’s name is in all kinds of places actually, as he moved quite a lot. Other composers lived and created here too: Bruckner, Mahler, Korngold, Schönberg and the second Viennese school, the Strauss family,… The list could go on and on. It is quite incredible actually how many musicians lived here. Of course, I could compare parts of the old city, the first district, with for instance Salzburg. One also feels the presence of Mozart there. The major difference, however, is that Vienna is a city, a capital with a much wider scope of periods being felt. All different stages of growth are very clearly present in the various buildings and their architecture.  At one point this capital ruled over a major world empire, the Austro Hungarian Empire. It stretched way east to Bulgaria and Rumania and south all the way down to Syria. The influences and reactions to this huge empire on art and architecture are present all over the inner ring.

The Albertina going through time A highlight representing the moving with the times was my visit to the Albertina. The Albertina used to be one of the biggest Palais of the Habsburgs in Vienna. Built on the remains of the city wall, it was used as a residence by Maria-Theresia’s favourite daughter, the Duchess Marie-Christine and her husband, the Duke Albert of Saxe-Teschen. The Duke founded his collection in 1776, leaving upon his death in 1822 more than 14.000 drawings and 200.000 masterpieces including works by Dürer, da Vinci, Michelangelo, Rubens, and Rembrandt. This is the central piece of the collection of the Albertina to this day and is the main attraction of the Museum. His nephew, Archduke Carl, administered and continued this collection, passing it on to his own son Albrecht upon his death. In turn, Archduke Frederick received the collection before having to let go of most of it in 1918, as Austria became a Republic. In 1945, the museum was bombed. It was then partly rebuilt and partly newly built. The main attraction of the Albertina is, as mentioned earlier, the graphic Collection. The museum however also has big temporary exhibitions. My own visit was aimed to see the major Monet retrospective, which I thoroughly enjoyed. However, I won’t go into detail of it here, as that really deserves a post of its own. The big discovery for me though was when walking up to the Monet rooms, suddenly being in the living rooms of the Duke and Duchess. The wall tapestry, the carpets, the furniture, the paintings and lithographs of some of the artwork collected all make you understand that this was a residence lived in by great art lovers in the enlightenment period. It is a totally different world from the entrance and other section of the museum which are modern.

I really could go on and on singing my praises to this city, but I really think each one should make their own impressions. What stroke me most is that culture is present all over here. For me, culture is identity, language, history, tradition, a way of thinking and of being, art in all its forms and education. I could experience all of this in Vienna. Is this unique to this city? This is an extremely hard question to answer, other cities have some of these attributes too. However, the amount of culture makes Vienna certainly a very strong contender for that first place. It makes me eager to discover more on my next visit.