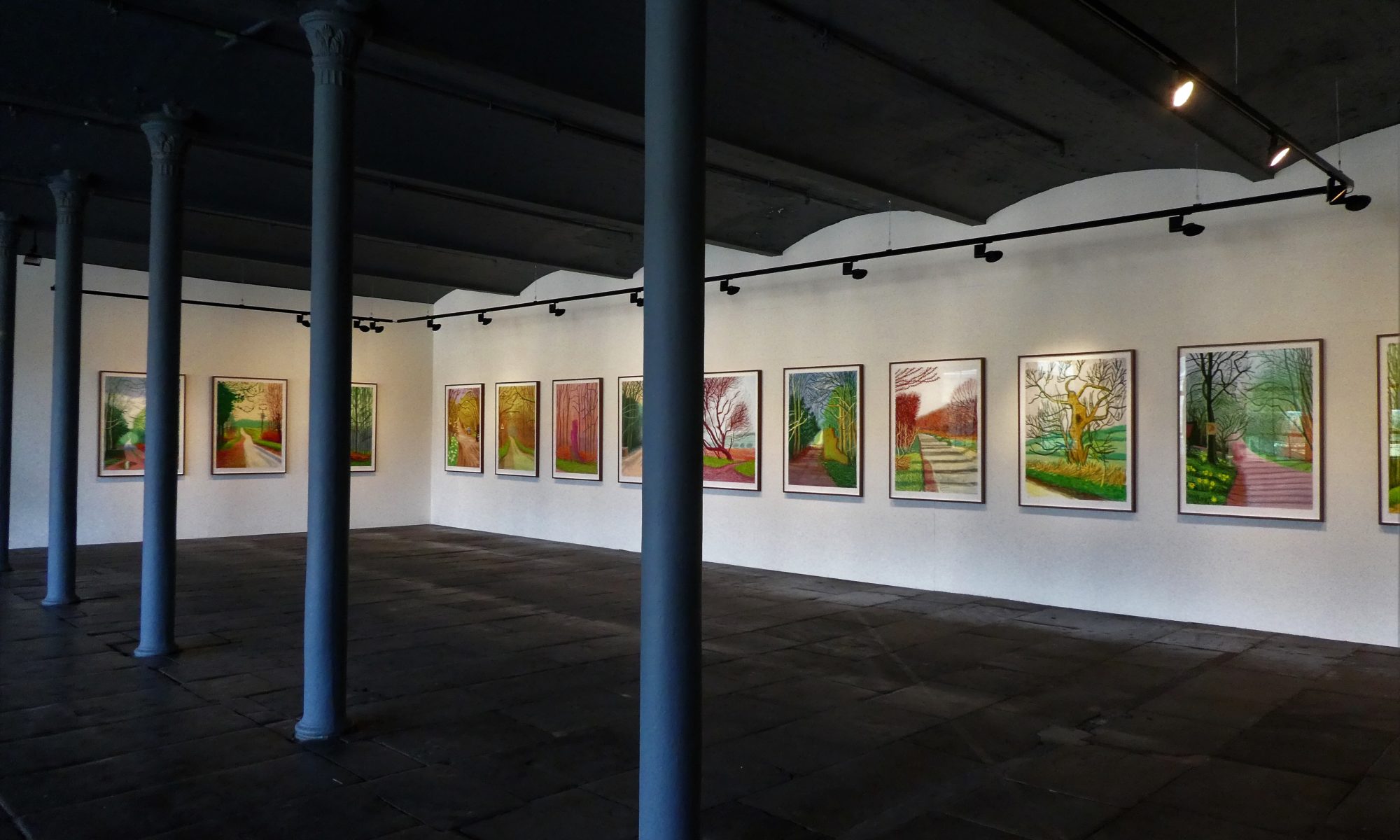 Well yes, it wasn’t really about his thin legs, but the fact that he mentioned them in the introductory blurb made me warm to him even more.  He wanted to complete an artwork every day, in the early spring of 2011, to document nature’s inevitable forward movement, and the sheer beauty of the spring in one particular lane in East Yorkshire,.  Spring temperatures being what they are in that part of the world, whilst he would have liked to face his subject directly, he had to take refuge in his car (due to the aforementioned thin legs).

The idea was to document every day in that spring, and that he did.  The exhibition collates those pictures with the most impact, and it has to be said that they are stunning.  Ridiculous that it costs nothing to see these fabulous artworks!

These images were created (I am wondering whether one can still say “painted”) using Hockney’s iPad and a bog-standard app;  the limitations of the medium are very obvious as soon as you get anywhere near the prints.  It doesn’t matter, though!  Move back a bit; unfocus the eyes if necessary; this is mastery.  Hockney knows how to block colour, how to pull the gaze; it’s a masterclass in composition.

From the unfrosting ice of the first pictures to the lacy froth of the greenness in the last, this is an artist documenting his environment, his times, his intimate world, as they change infinitesimally around him.  The pictures are arranged chronologically, so you can actually feel winter turning into spring.  (I managed to do this the wrong way round the first time I visited, though, and it didn’t spoil my enjoyment!)

This particular picture is so light and hopeful, the blossom on the bush appearing like lace in the gentle spring sunshine.   Like all of these compositions, it’s best viewed at a  certain distance; I include a detail here as support!

It really was quite astonishing to see what he had managed to achieve with his iPad; I entered as a cynic, and came out a convert.  So much so that I persuaded my mother, who had come to see me in performance, that we should both stay over near the venue so that she could visit the exhibition the next day – so I saw it twice, once in louring rain, the next day in bright sunshine.  Fabulous!

The site of the exhibition was also fascinating in itself; Salts Mill, in Saltaire, near Bradford, West Yorkshire.  A massive building with a fascinating history (in short, the mill and the surrounding town of Saltaire was planned and built in the mid-nineteenth century by a textiles magnate by the (utterly magnificent) name of Sit Titus Salt.  It was all designed as an antidote to the “dark, satanic mills” that constituted Bradford at the time.  Saltaire is an immensely pleasant place even now; well worth a wander round if you happen to be nearby (it’s has been designated as a UNESCO World Heritage Centre.

The massive spaces and iron pillars of the mill made it a very good fit for these particular paintings; Hockney is definitely not what you might call an effete aesthete.  In fact, there is also a corner of this exhibition where you can sit and watch the drawings he made on his iPad as little messages to friends, pop up on three digital screens, and I had to laugh out loud a couple of times, not least at his stubborn pro-smoking missives.

After we’d left the exhibition, she for the first time and I for the second, equally entranced, my mother and I headed to one of the cafés in Salts Mill for refreshment.  I ordered a dandelion and burdock (for those unfamiliar with the drink, explanation here) and proceeded to stare, fascinated, at the beautiful patterns the light made travelling through it, making the liquid glow deep red, with complex patterns caused by refraction in the glass patterning the table, and changing with every sip.  I believe that one of the things that makes good art so worth chasing after and drinking in is the degree to which it sensitises you to the beauty all around you.

Well, that’s my excuse – pretty certain the bloke at the next table thought I was a thoroughgoing weirdo, photographing my drink more than actually sipping it . . . Oh, and did I mention that it’s free to visit this exhibition?  Free parking at the Mill, and Saltaire train station right across the road.  Do make time to go if you happen to be nearby.